This is my personal Lyme Disease story that I've shared, many times. Short version is that I was able to cure myself naturally from multiple infections (Lyme disease, Babesia, Bartenella and other infections) with master herbalist Stephen Buhner's herbal protocol after 18 months of triple antibiotics therapy could not fully eradicate the infections.

My approach to Lyme Disease Treatment and much of what we do to treat Lyme and co-infections naturally at TAO come directly from the life work of master herbalist Stephen Buhner.

This 5 minute clip is from my one hour Natural Lyme Disease Treatment Presentation at Designs for Health 2022 CASI (Clinical Applications of Scientific Application) Conference is a shortened version of my experiences that have led me to developing TAO into a healing center that specializes in treating Lyme naturally.

Get all of the slides and watch Dr. Hinchey's entire Natural Lyme & Babesia Treatment Presentation (55:38 min) on her LymeBytes™ App For Free ➡

*Dr. Hinchey regularly lectures at Lyme Disease Conferences around the country, including her own annual, LymeBytes® Symposium... to promote education for both physicians and the public on natural Lyme disease treatment, effective diagnosis and patient funding.

My Introduction To The Truth About Lyme

So I was lucky enough in school to have a patient, a young woman in her early twenties who had chronic Lyme disease and Babesia.

She had been on a multitude of antibiotics over several months.

She had been on IV rocephin for six months and still she was getting sicker and sicker.

So this was my introduction into the truth about Lyme disease.

And the truth that everything that I learned in school about Lyme disease was false. In most cases.

I learned about ILADS.

I started participating in annual meetings. And I learned about proper testing and diagnosis.

For the first couple years of my career I was basically diagnosing referring the patients outfor this you know ILADS type protocol of triple antibiotic therapy. And I was basically doing damage control as a naturopathic doctor doing the best I could to support the patients gut and you know deal with oxidative stress and and all of the other things that we need to do for our patients.

My Lyme Disease Babesia, Bartonella, Mycoplasma and Chlamydia All At Once

And then a few years in I had a pretty traumatic event myself and was under a lot of stress and developed a lot of really weird symptoms.

And I ended up being diagnosed with Lyme, Babesia, Bartonella, mycoplasma and chlamydia all at once.

And luckily I knew several of these ILADS physicians and began treatment. So I was on triple antibiotic therapy plus some for a good 18 months. And I basically regained full function.

I had no symptoms but every single time I tried to get off the antibiotics I would relapse within weeks to months.

And it was then that I found the work of Stephen Buhner. He happened to be putting on a seminar like an hour and a half from my house. And he's from New Mexico, I live in Connecticut, that was about three weeks away.

And I went to the seminar. Read all of his books. Started corresponding with him via email.

Treated myself with his protocols.

And... it was just amazing.

Meant to be right?!

I started using these protocols with my patients and started doing integrative therapy.

We had patients doing you know somewhat of an ILADS protocol triple antibiotic therapy along with doing the herbs lifestyle modification you know all the things that we do is naturopathic doctors.

And I definitely saw an improvement versus what I was seeing before you know just using antibiotics.

And then Stephen Buhner put my name out on his site and in one of his books and I startedgetting an influx of patients who wanted me to treat them only they didn't want integrative therapy. They wanted specifically what he talks about in his books.

They wanted to use his approach and herbs only.

So I'm going try to make this a shorter story.

I had two self-selected groups of patients.

I had one that was doing this integrative care, and then I had another who was doing basicallywhat I'm doing with my patients now which is naturopathic medicine, functional medicine and herbal medicine.

And fast forward a couple years, what we started to notice is that the patients who were doing this non-antibiotic therapy seem to have a more steady resolution of theirinfections, were becoming symptom free and being able to be weaned off their protocol and remain symptom free while a lot of the patients in this integrative treatment plan, were rounding years three years four, and so on.

And then at the end of this integrative protocol we were basically taking off the antibiotics keeping them on their herbs now doing all sorts of damage control healing the gut still dealing with an inflammation.

And it was kind of like an aha moment where, you know I'm a naturopathic doctor I was taught to go from least invasive to most invasive first do no harm.

So this was about six years ago And as a practice we decided that we were going to start with this approach.

And as long as the patient was making steady progress and resolving their symptoms, that's what we would stick with.

So that's where I am today. And I would say today roughly 75% of my patients that comein have some known history with Lyme disease.

I would say a majority of them have been on multiple antibiotics for months, years, some decades.

And others of that 75% you know have had some sort of tick-borne disease in their past.

They took antibiotics and as far as they and their doctors were concerned it had been resolved.

The other 25% are patients that really can't figure out what's wrong with them. They have complex chronic illness.

A lot of them have atypical diagnoses and they've been told that there's no way that they have Lyme disease but they've not been appropriately worked up or tested.

Dr. Hinchey is also the owner and co-founder of Lymecore Botanicals, a MAPS Certified Clinician, as well as a licensed medical acupuncturist.

Dr. Hinchey practices integrative naturopathic medicine for the whole family and additionally specializes in the reversal and prevention of Chronic Disease, and has become a sought after Chronic Lyme Specialist, incorporating cutting-edge healing modalities. Her treatment practices rely heavily on the principals of Functional Medicine and Therapeutic Lifestyle Change (TLC) as well as biomedical treatment of neurodevelopmental disorders including Autism Spectrum Disorder, Pervasive Development Disorder, and ADHD. 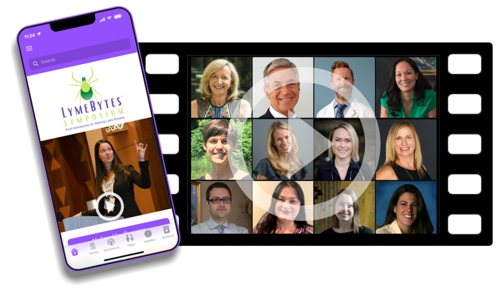 My personal struggle with Lyme Disease and how it led to the creation of Lymecore Botanicals.

Dr. Hinchey, Medical Director of Tao Vitality, is also the owner and a co-founder of Lymecore Botanicals.

"Why I have Almost Every Lyme Patient
on Modified Citrus Pectin" ~ Dr. Myriah Hinchey

Get all the slides and watch Dr. Hinchey's entire Natural Lyme & Babesia Treatment Presentation (55:38 min) on her LymeBytes™ App For Free ➡

1. How to Avoid Getting Bit

Dr. Hinchey Explains The Science of How Lyme Spirochetes Infects Your Body From A Tick Bite & How the mechanism of action for each herb inhibits Lyme Disease.

Created by Dr. Alexis Chesney, the Tick Preparedness Kit has everything you need to treat a tick bite. 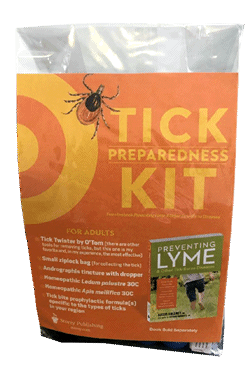 As described in the book Preventing Lyme and Other Tick-Borne Diseases by Alexis Chesney ND.

Tick-Borne Diseases (Lyme Disease and co-infections such as Lyme borreliosis, anaplasmosis, babesiosis, Powassan virus, and B. miyamotoi infections) come from the many different species of ticks found in Connecticut.

We now know from 2020's CDC funded study that the 2021 tick season was projected to be potentially one of the worse, not only because of weather and environmental conditions but also because the number of species found in Connecticut is growing....and it was.

2022 data indicates the increase in activity, number of species migrating north and other factors means a repeat of a very active 2023 tick season as well.